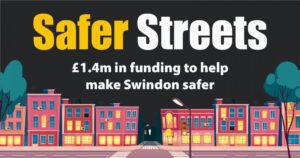 Residents in Swindon will benefit from funding from the Home Office to improve community safety.

The money was awarded following bids to the Government’s Safer Streets Fund by Swindon Borough Council, supported by the Office of the Police and Crime Commissioner.

Swindon has been identified as one of a number of areas across England and Wales who will receive funding from the latest round of the £50 million Safer Streets Fund to prevent violence against women and girls in public, neighbourhood crime and anti-social behaviour.

Swindon Borough Council secured just under £1.5 million, in two separate bids. The first bid awarded £742,500, to be spent on introducing measures to tackle ASB and violence against women and girls. This funding will focus on the Victoria Road, town centre, Old Town, Toothill and Walcot areas in Swindon.

The second bid, also for £742,500, will be spent on measures to tackle ASB, focussing on the Eastleaze, Gorse Hill, Eastcott and Park South areas of Swindon.

Since the first bid for funding was entered last year, several surveys have been launched to help understand how safe residents feel on Swindon’s streets, and where improvements could be made. An additional follow-up survey was launched this year by Swindon Borough Council and Voluntary Action Swindon, to get additional information. In total, over 4,000 people responded to the surveys, with feedback helping to inform the bid submissions, including identifying the recommended measures to be introduced and the locations to be targeted.

This is the third round of Safer Streets funding received by Swindon Borough Council, with funding now totalling £2.4million.

So far, the funding from previous rounds has supported the introduction of various measures and initiatives. Funding from Safer Streets funding round two, led to the installation of 10 fixed and 10 deployable CCTV cameras to link back to the Council’s control room for monitoring by control room staff who already have direct links to local Police teams.

With funding from round three, the Council worked with partners to identify a number of hot spot locations for acquisitive crime and installed additional lighting in the rear alleyways where CCTV would help deter anti-social behaviour activity.

With this extra funding announced today, the Council will build on ongoing work to provide training and support in schools and businesses, and work closely with local families to provide early interventions. Training will also be provided to local practitioners, while also developing the trigger process across the local authority and engaging with communities.

Councillor Cathy Martyn, Cabinet Member for Health Inequalities and Housing, said: “I am extremely pleased to hear that Swindon has once again been successful in its bid for funding from the Safer Streets Fund – this time securing two lots of funding, worth over £1.4m.

“In our bid submissions, we worked with the Police and the OPCC, and used the information received from residents who responded to the consultation, to identify the areas of Swindon where many local residents felt the most unsafe. These are the areas where this funding will be focused, in the hopes of making the biggest difference.

“We also identified how we propose to best utilise the funding we receive, and as set out above, we have produced a very thorough plan of proposed interventions, which focus on early intervention, education and youth engagement – measures that could truly make a difference.

“This is the third round of funding we’ve received, so this additional money will add to the proactive work we’re already carrying out with our partners, including more work with local schools, with families who need more intensive support, and more early intervention work to try to prevent situations arising in the first place. We want to work with our communities to make our town safer.”

You can read the Safer street reports here;