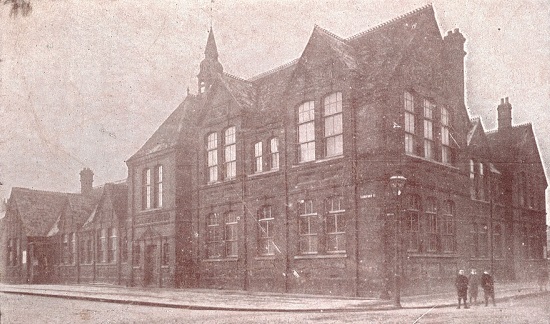 Sanford House (also known as Swindon Advice & Support Centre) is the town centre’s charity hub. The historic building has stood for more than 130 years and was the former location of Sanford St Boys’ School. The building was the creation of architect Brightwen Binyon, who also designed the town hall in Regent Circus, Westcott School in Birch Street, and the 1892 additions to the Mechanics’ Institute.

The building was temporarily commandeered by the War Office as a hospital during the First World War, but remained in use as a school until 1966, when Sanford St Boys’ School was amalgamated with the girls’ school on Drove Road.

On June 30th 2014, Sanford House began a new lease of life as a central hub for charitable services to provide information, advice and support to local residents under one roof and in an easily accessible location. 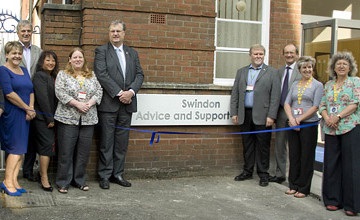 The transformation of the building began in 2013, supported by an investment of £350,000 from Swindon Borough Council and the Swindon Clinical Commissioning Group. Not only has the move improved residents’ access to vital services, it has encouraged joined-up working between the organisations now resident at Sanford House. The Council has estimated that the shared arrangements will save around £25,000 a year in grant funding needed for properties.

Working with the Council and other voluntary organisations, VAS took a lead role on the design and development of the centre, and now has responsibility for managing the building.

People needing support can drop in, via the main reception in Sanford Street, explain what help they need, and see the right people as quickly as possible. The reception area also features public access computers, fact sheets and leaflets. The main reception is open from Monday to Friday from 9:30am – 4:30pm. All services are accessible from the main reception, apart from Citizens Advice Bureau, which is accessed via the College Street entrance, and Shopmobility, which is based in the car park at the back of the building, also accessible via College Street.

The Alzheimer’s Society are here for anyone worried about or affected by dementia. They provide information and support, fund medical and social research, and campaign for better quality of life for people with dementia and greater understanding of the condition.

Enham Trust supports people who are eligible for funding from adult social care. Enham Trust equips vulnerable service users with the tools to live the life they want, regardless of impairments.

Healthwatch Swindon’s task is to understand the needs, experiences and concerns of people who use health and social care services and to ensure their voices are heard and responded to.

LIFT have been providing psychological services to the people of Swindon for the past 20 years and pioneered Primary Care Psychology services within the country.
They offer a high quality service that includes traditional Improving Access to Psychological Therapies (IAPT) interventions plus additional support.

Swindon’s Shopmobility scheme provides a selection of wheelchairs and scooters to help people with mobility difficulties to use the facilities in the town centre.

Swindon Advocacy Movement (SAM) is a user-led independent advocacy service which empowers people with care and support needs in Swindon.

Swindon Carers Centre was established to provide help and support to people with caring responsibilities in and around Swindon, creating a community where unpaid carers of family members are recognised, valued and supported.

Where to Find Sanford House

Sanford House is based in the town centre, only 5 minutes walk from the Fleming Way bus station. Nearby car parks include Whale Bridge and Fleming Way car parks.