Organisers of Swindon’s Children’s Fete, which this year celebrates its 150th Anniversary, have launched a crowdfunding campaign to raise money for the event.

Up to 10,000 people are expected to attend the event this year, which will include fairground rides, music, dance, food stalls and a bar, in the GWR Park on Faringdon Road on Saturday 9th July. Those who donate to the campaign will receive free fairground ride tickets.

The Mechanics’ Institution Trust, which organises the event, has been awarded a grant by the Big Lottery to cover the core costs but they need to raise more money to help celebrate the special anniversary.

Hannah Parry, event co-ordinator, said: “We’re very pleased to be able to deliver what should be a really exciting event for Swindon and we’re seeking crowdfunding to help make it as special as it deserves to be.

As we’re expecting higher numbers of people than previous years, costs of holding the event (things like toilets, security, insurance, first aid cover etc) have also doubled! It’s important that the event is free to attend so that children from all backgrounds can enjoy this town-wide celebration, therefore we can’t rely on ticket sales to cover costs.”

The crowdfunding campaign runs for 3 weeks until Friday 24th June. If 100 people each week donated £10 they will reach their target.

“One of the key elements we have always wanted to bring to the event is traditional fairground rides, specifically a Steam-powered Carousel and an original-style Helter-Skelter, but these are expensive to hire for the day. It would be amazing if we could get enough funding to help us achieve this in this special year!”

This year’s Fete coincides with the 175th Anniversary of ‘New Swindon’, when the GWR came to Swindon. The event, which first began in 1866, was established by the first generation of Great Western Railway workers and was organised from their premises, the Mechanics’ Institution.

The original event ran right up until the Second World War and was resurrected by the Mechanics’ Institution Trust in 2003.

Hannah said: “In 2012, the last time we had a lottery grant, we had 7,000 people attend throughout the event. With this being the anniversary, we could attract crowds of up to 10,000. It’s a town-wide event, which seeks to provide entertainment for everyone of all ages. We want to celebrate our heritage but also our town today – its current day culture and community. There’s so much great stuff happening in the town, we really want to pull it all together and just show it off.”

Swindon Dance, Prime Theatre and Falding’s Fandangos are working together on a special performance to mark the anniversaries. Artsite, Lower Shaw Farm and many other community groups will also be involved and the people behind Swindon Shuffle, the town’s original music festival, will be running a live music stage through into the evening.

To donate to the event go to https://www.fundsurfer.com/project/the-150th-anniversary-of-swindons-traditional-childrens-fete 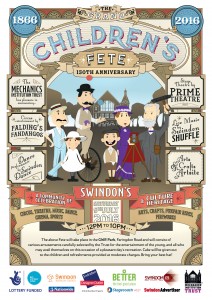